You may not be aware of the fun fact that the cosmopolitan island of Mykonos is home to a unique mascot, Petros the Pelican. This is even more strange as pelicans are not native of the Aegean, which makes it an unlikely mascot. But let us tell you the story behind the most famous Pelican of the world!

How Petros ends up in Mykonos & his life in the island

Back in 1958, a local fisherman discovered a wounded pelican, and decided to take care of him. He provided medicine and shelter in hopes that one day it could be set free. When the pelican finally regained his strength and was set for release, he decided not to leave. Who could blame him? He was constantly showered with love and attention from locals, and who would pass up the opportunity to live on this gorgeous island in the Aegean sea. Mykonos was now his home. 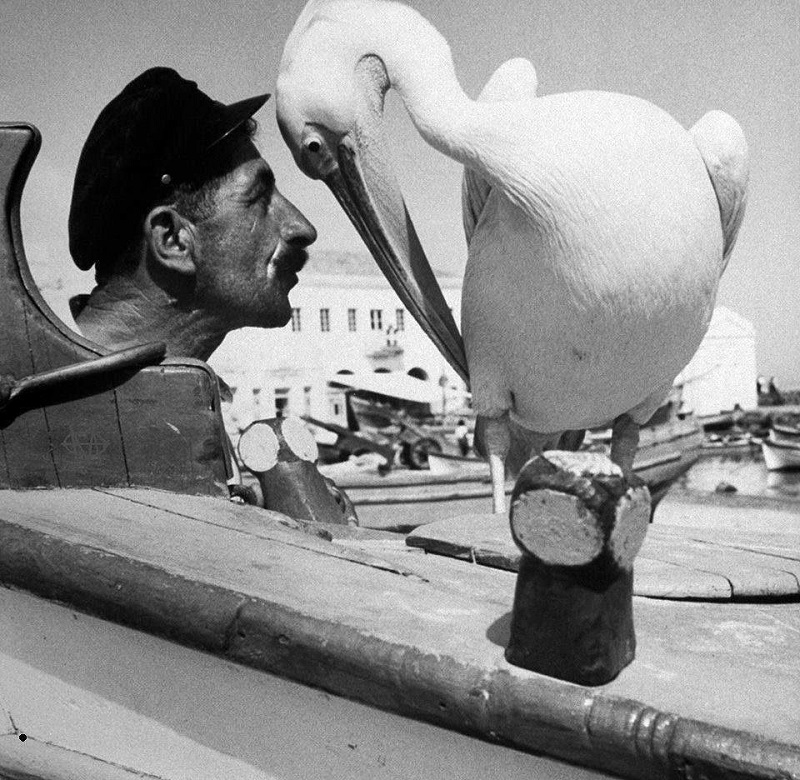 The poor islander took a good care of him and the two became an inseparable pair, often found out for walks along the port on Sundays. During the winter, Petros was even given his own house to protect him from the winds and the low temperatures.

The Death and Resurrection

Petros the Pelican died on December 2nd when he got trapped under the wheels of a car. Petros was 33 years old. Everyone on the island went into mourning, and was so sad at his loss that within no time they introduced a substitute and the tradition was honored throughout the years after Petros the second (and third and fourth) passed away.

Friendships With Jackie O and Friends

As you may know, Jackie O frequently visited the island of Mykonos throughout her life, especially after her marriage with Onassis. During her time here, she came to the rescue in keeping the mascot tradition alive and donated another Pelican to the island named Irene so Petros could have a suitable mate. The island was very grateful as when Petros died, the people were not left pelicanless because they already had Irene. With this mascot catching international attention, the Hamburg Zoo decided to donate Petros II to the island, who brought much fame and stardom in a short period of time. 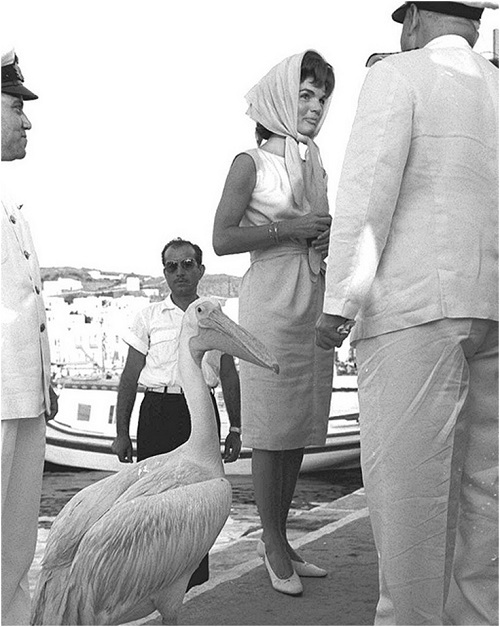 Then in 1995, another wounded pelican found its way to Mykonos. The locals saw it as a sign and as they nursed it back to life. This third pelican made its home on the island — he was named Nikolas.

With many donors throughout the years, Mykonos welcomes three pelicans in and around the main town, with one, of course, always given the name of Petros.

Fun Stories and Legends About Petros

Where You Can Find Petros

Today there are three pelicans residing on Mykonos and can often be spotted as a pair or group walking along the waterfront. Please note, they are aware that they are famous and expect celebrity treatment from locals and visitors.

A day in the life of the pelicans usually goes something like this: Head to the local tavernas to get their daily treat of fish, and then strut around the cobbled streets of Chora to pose for a few photos until they get hungry or need a nap. Petros and the other Pelicans spend most of their days napping near the boats on the harbor.

Their favorite hangout spots include Nikos Taverna (where they pose for photos with diners and then collect fresh fish treats from the kitchen), Paraportiani Square, Little Venice, the windmills on the hillside above Little Venice, and along the Mykonos Town waterfront.

Should you visit Mykonos next summer, try to spot one of these pelicans. It may not be Petros anymore, but the current resident pelicans are definitely trying to uphold the original mascot’s legacy.