Let’s celebrate the Christmas spirit today by taking you through some of the most popular customs, of Christmas & New Year’s Eve in Mykonos island!

Mykonos in all its fine glory in the summer with its brilliant blue and pure white landscape remains an enticing and tranquil location to celebrate Christmas and toast in the New Year.

Just like the rest of Greece, Mykonians, known for their easygoing attitude and warm hospitality uphold old traditions and religious celebrations, sharing their local customs and homemade culinary delicacies with families, neighbors, and visitors to the island.

In Mykonos and the Cyclades islands it is custom for children to carry toy boats decorated with lights & nuts painted gold. Carrying a boat is a very old custom in the Greek Islands. Although carols differ from island to island, they are all joined with local musical instruments. In reward for their song, carolers are treated with sweets and coins. 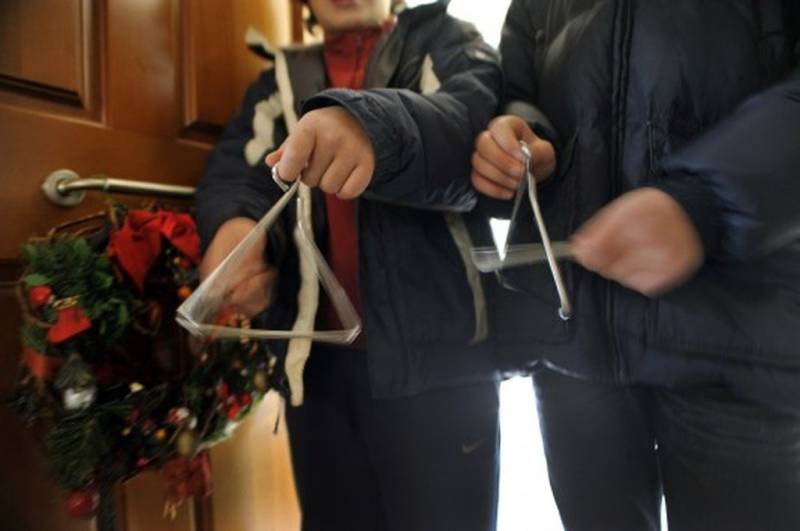 It is custom for children to visit homes and ring the doorbell, asking “Na ta poume?” (may we sing for you?). The answer should be “Peite ta” (Sing) if you want them to sing, or “Mas ta eipan” (we’ve had carolers already), if many groups have passed by already and you are fed up with carols.

The entire Christmas celebration lasts about 15 days, as they begin on Christmas Eve and end on the 6th of January which marks the celebration of the Feast of the Holy Theophany(Epiphany)*. The festive atmosphere begins of course, with decorations. 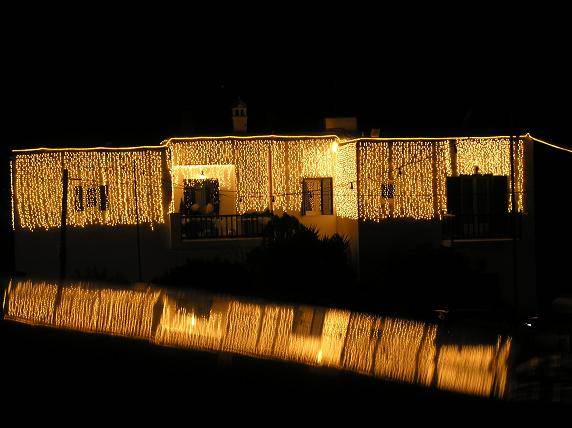 Although the Western custom of decorating a tree is also widely used throughout Greece, the Cycladic islands follow their own tradition, decorating a small model boat given the people’s close connection with the sea. As you may assume, the Christmas boats were incorporated to the Greek tradition as Greece is a nautical country with many cultural aspects and marine traditions, symbolizing their deep ties to the sea.

Mykonos decorates its town square and the Old Port with numerous joyful cultural events, offering festive and fun things to do for children of all ages. Mykonians also tend to decorate the windows of their shops & houses, adding to the festivities and ambiance during this period. 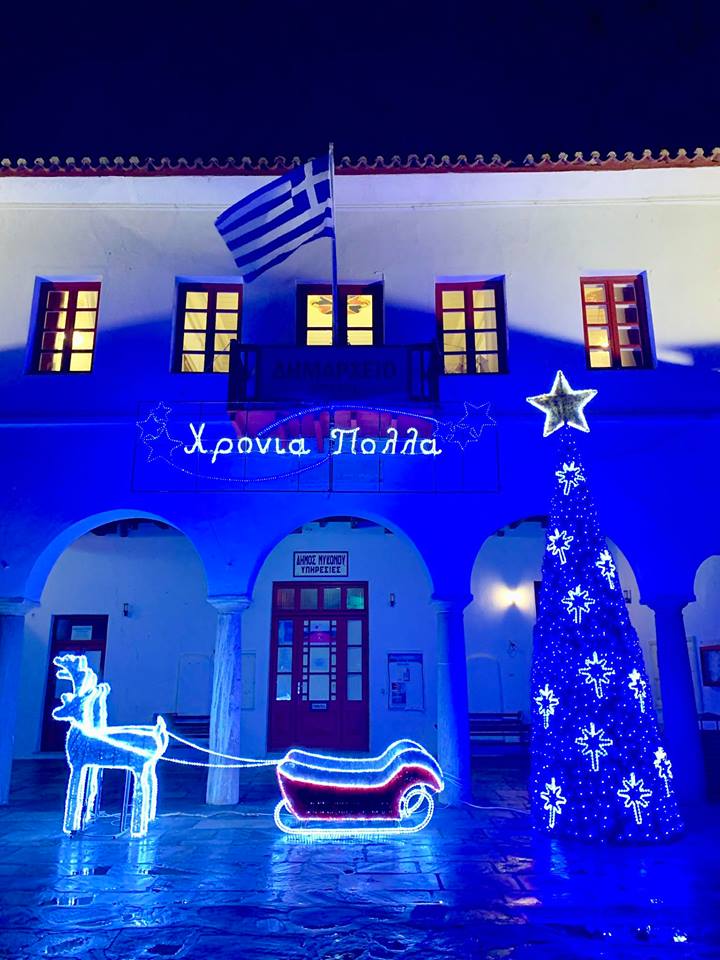 Like so many other countries throughout the world, food plays an important role in Greek Christmas traditions. Some Greeks will fast and not eat meat for 40 days before Christmas, and break their fast after the midnight mass on Christmas Eve.

The main Christmas meal in Greece tends to be either pork or lamb, which is slow roasted in an oven or cooked slowly on a spit. Sweets and puddings are an integral part of the Greek Christmas experience, and there are several delicacies that are synonymous with the holidays. Sweet-toothed Greeks tuck into the sugar-coated kourabiedes cookies with almonds, or honey enriched melomakarona biscuits with chopped walnuts, as well as other Greek pudding staples like baklava, kataifi or diples. 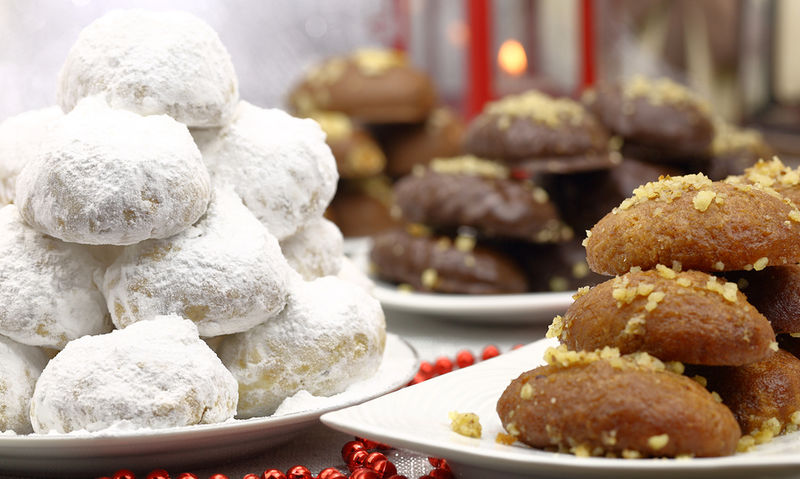 The most important Christmas food in Greece is the Christopsomo (Christ’s bread) with cinnamon, orange and walnuts and a sign of the cross on the top. Families bake the bread in their houses on Christmas Eve, and the head of the house blesses it on Christmas day and shares a piece of it with every person at the table.

Similar to most cultures, there is also a traditional Christmas feast in Mykonos. 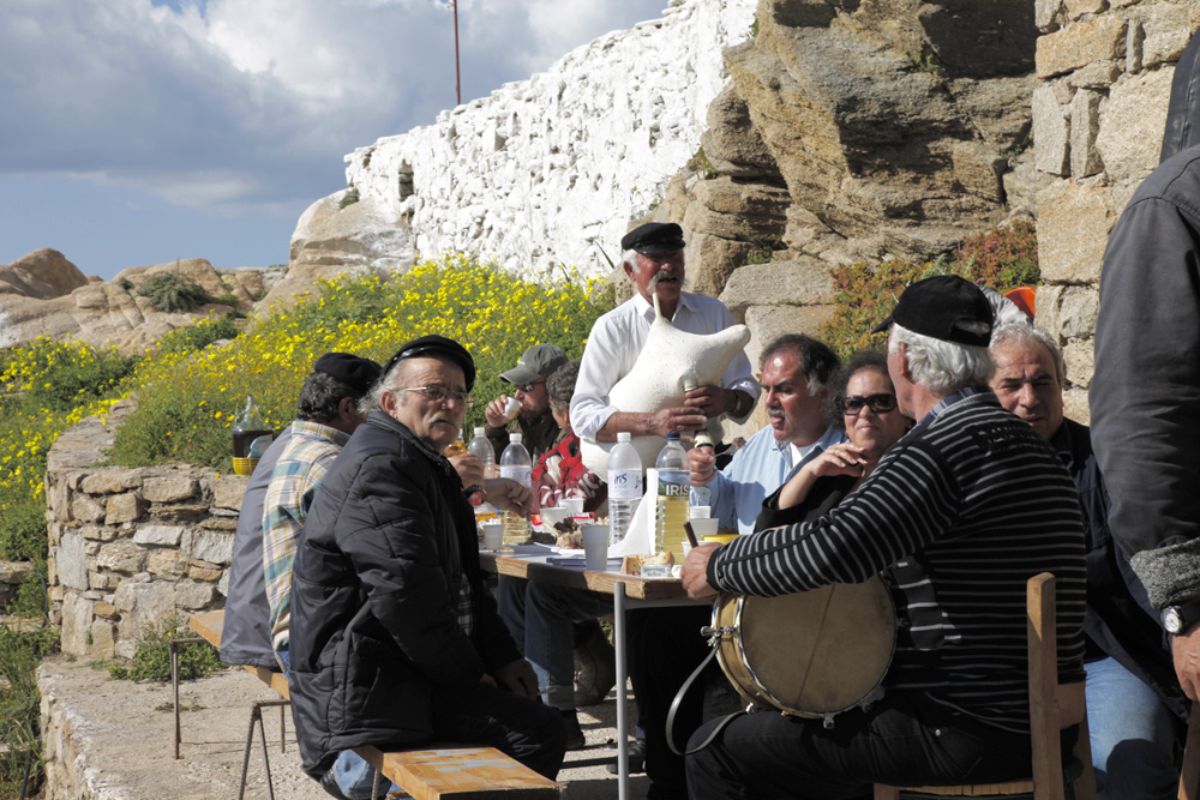 Agios Stefanos feast takes place on December 27th in the Agios Stefanos church. During the feast, the people come together to sing Mykonians songs with tsabounes (bagpipes) and violins. These traditional organs make the visitors dance in a fast Cycladic rhythm with traditional dancing figures that remind the Aegean wave. 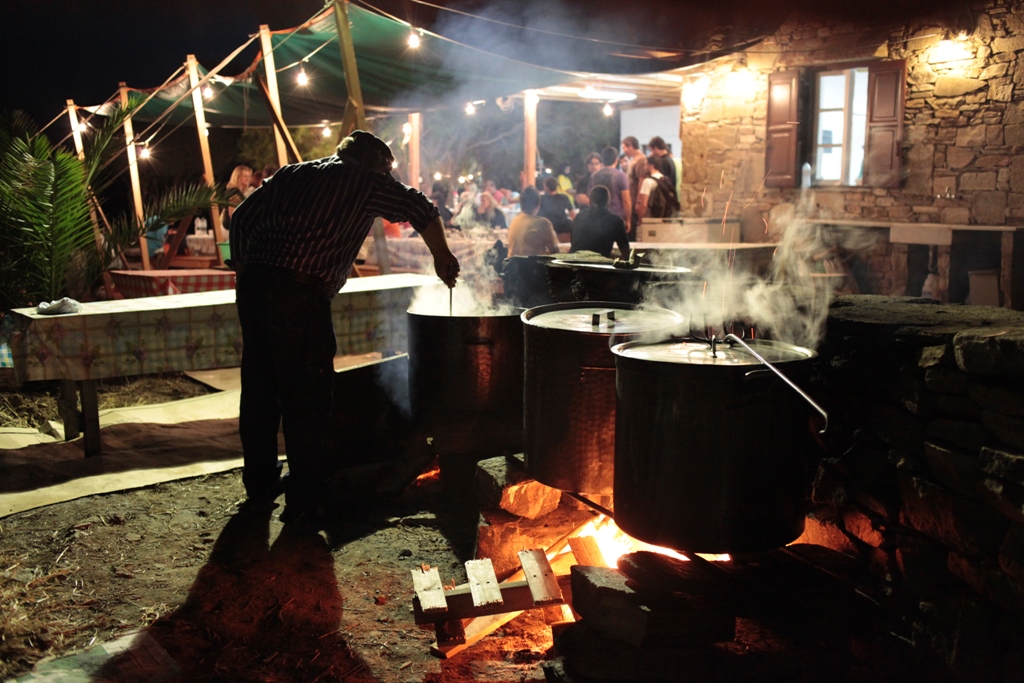 These feasts are typically organized by civilians in a keli (cell) located next to the church, which helps everyone gather around especially in the winter to keep warm. The celebration starts immediately following the esperinos in church (the evening prayer) and in typically Greek fashion, they can go until the early morning.

1. The most common New Year’s custom for the Greeks is the Flouri (coin) in Vassilopita (Greek New Year’s cake). The head of the family will bless the Vassilopita cake by making a sign of the cross over it three times, and will then cut portions of the cake for Christ, the Virgin Mary, the house, and finally one piece for each of the members of the family at the table, with the hope that their piece has the Flouri (coin), symbolizing a lucky year.

2. After midnight, Greeks break a pomegranate on the ground in the house (usually in a bag because the pomegranate juice and seeds make a mess), as this fruit is associated with luck and prosperity.

3. Both in Mykonos and throughout Greece, people exchange holiday gifts on New Year’s Eve. According to the Greek calendar and tradition Santa Claus (Agios Vassilis) leaving gifts below the tree for the kids. Greeks also leave a plate full of sweets and other delicacies for Santa. Note that Agios Vassilis is not the same person or image as Santa Claus, Agios Vassilis comes from Caesarea, not from Northern Europe. 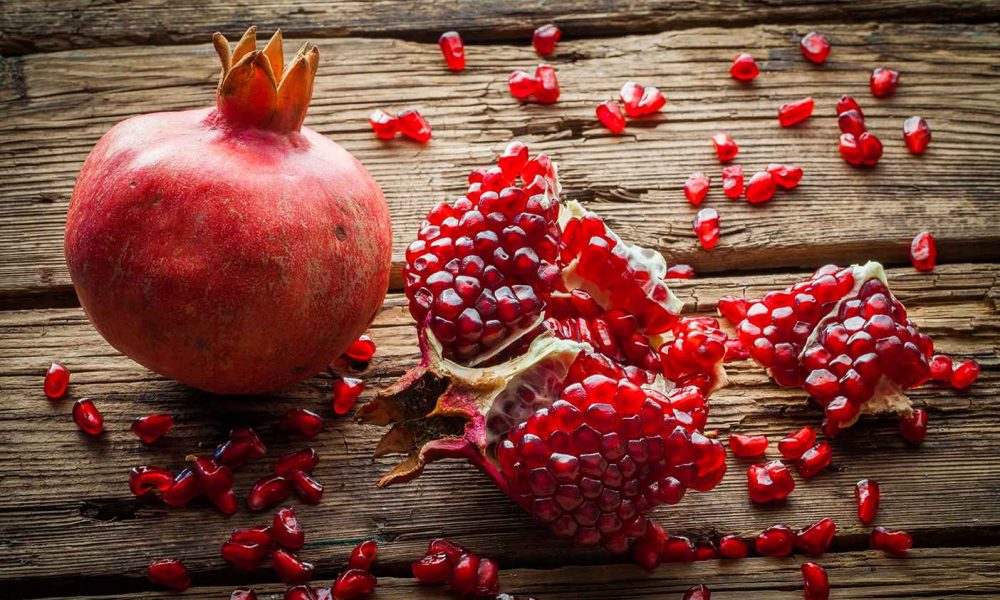 4. If people celebrate New Year’s Eve outside their houses, they must return in the evening (or morning) and enter the house on the right foot, as this is supposed to bring good luck to the household.

5. When the year changes at midnight, Greeks turn the lights off and turn them on again a few seconds later; this is a move that symbolizes the new beginning. They also open a bottle of champagne, which is a more modern custom for this night.

6. In the mainland and Cyclades islands, Greeks prepare a plate with several goods, including fruits, honey, seeds (almonds and walnuts) and sweets and eat from it on the first day of the Year.

The Epiphany Day is also a big celebration in Mykonos because it is the day when “balosia” begin. It is a custom originating from Venice and deriving from the words “ballonzolo”, which means skipping, and “ballocio”, which means a short dance. These dances are accompanied by violins, bagpipes, and tubas. 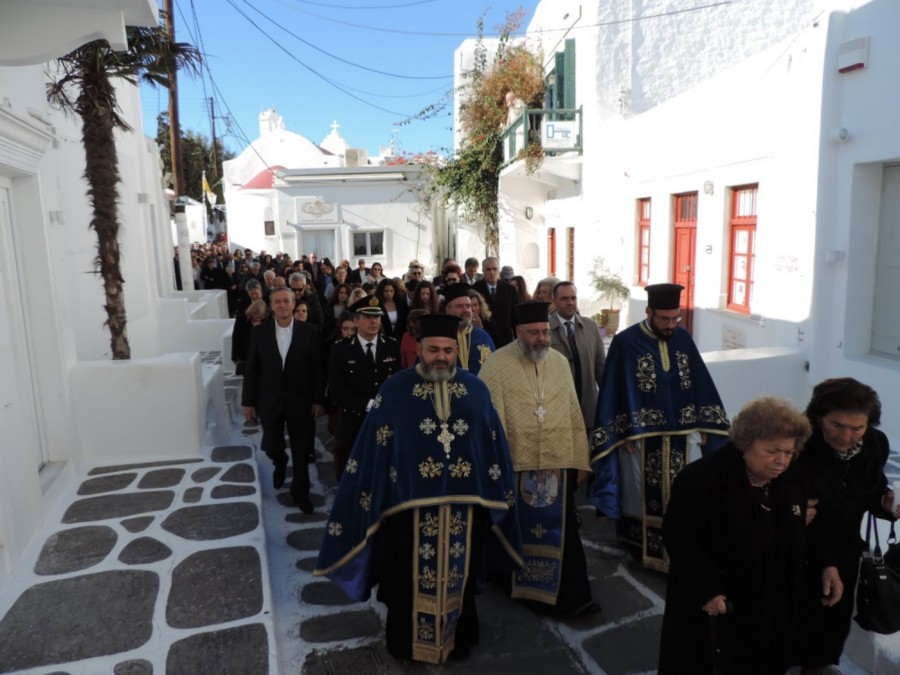 The Greek people celebrate the holy time of the Epiphany on January 6th in the Greek Orthodox Church, the day that Jesus was baptized as a man. 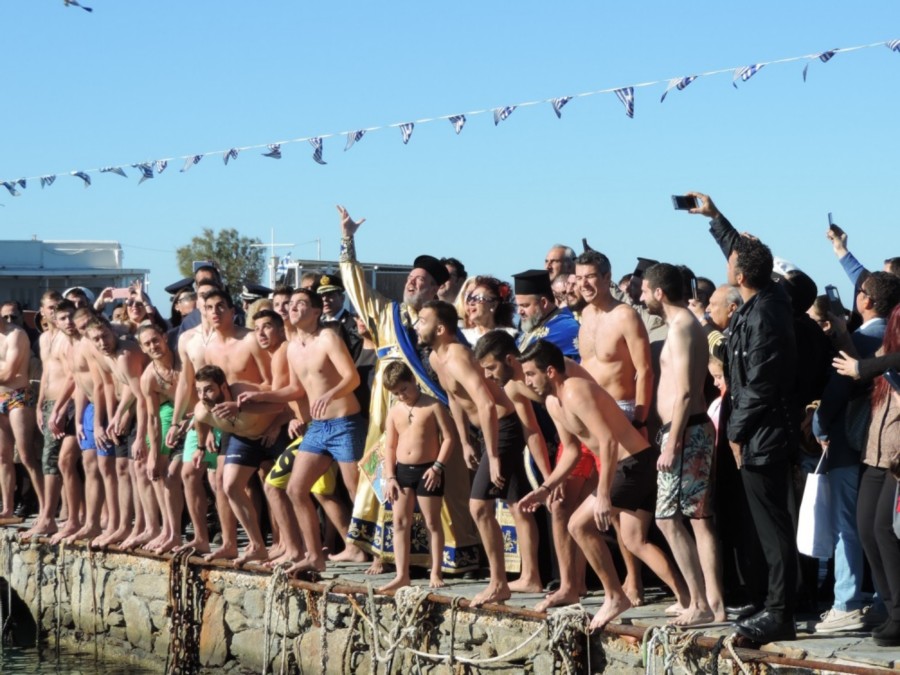 It is also known as ‘The Blessing of the Waters’,’ as it is custom in some parts of the country where young men dive into cold waters (lakes, rivers or sea) to swim across to get to a cross that has been blessed by a priest and thrown into the water. It is said that whoever reaches the cross first will have good luck in the new year. Epiphany festivals also include the blessings of boats & ships, music, dancing and lots of food.

Please fill up the below form to secure your booking for the Rhenia-Delos cruise. Upon confirmation you’ll receive an email from the supplier with all details.

Payment Method (required)
Pay with CashCredit Card
I here by authorize Aegean Ventures (official supplier) to secure my reservation and charge my credit card the total amount for all participants.

By submitting this form you agree with the storage and handling of your data by this website as described in our Terms of use and Privacy Policy. Please note that the supplier, not Mykonos Traveller, processes your payment and fulfils your reservation.

Please fill up the below form to secure your booking for the South Coast cruise. Upon confirmation you’ll receive an email from the supplier with all details.

Payment Method (required)
Pay with CashCredit Card
I here by authorize Aegean Ventures (official supplier) to secure my reservation and charge my credit card the total amount for all participants.

By submitting this form you agree with the storage and handling of your data by this website as described in our Terms of use and Privacy Policy. Please note that the supplier, not Mykonos Traveller, processes your payment and fulfils your reservation.