This alternative Mykonos Town guide offers you a more traditional look at the Cycladic life of Chora and includes many hidden treasures. 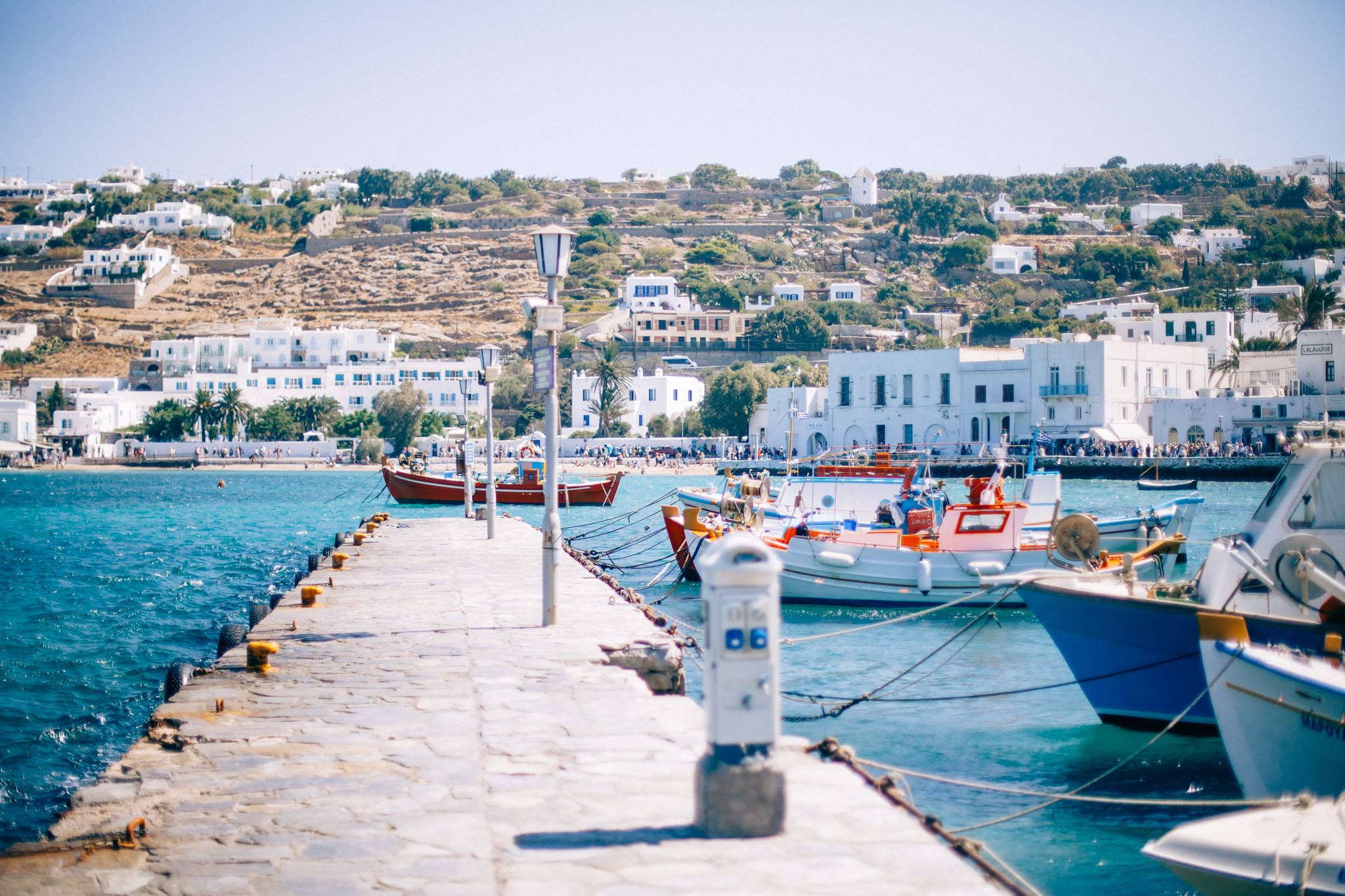 Mikri Venetia (Little Venice), with its view of the windmills, is without doubt the most famous place from which to watch the sunset when you’re in the main town of Hora. The most sought-after tables are on the rooftop of the Galleraki Cocktail Bar, at the windows right at the back of the Kastro Bar, at the Caprice Bar, at Scarpa and at Bao’s Cocktail Bar.

Mykonos’ renowned Armenistis Lighthouse was one of the largest in the Mediterranean, and, in fact, received an award at the 1889 Universal Exposition of Paris for the ingenuity of its mechanical workings. It remained in service until 1983, helping countless ships make their way safely through the narrow sea passage separating Mykonos and Tinos. Today, the lighthouse constitutes a part of the Aegean Maritime Museum – Mykonos.

To reach its courtyard, visitors pass through the impressive interior of a traditional Cycladic sea captain’s house. Among the items on show in the courtyard are grave markers, copies of items found on Delos and Mykonos. Inside the museum, models of ships, antique maritime instruments and coins with nautical themes from the 5th century BC will certainly grab your attention, as will the ombrellino, or parasol, that belonged to Manto Mavrogenous, a heroine of the 1821 Greek War of Independence. (The Academy of Athens honored Giorgos Drakopoulos, a benefactor of Mykonos, for his efforts in establishing this museum.)

The last traditional Mykonian kafeneio in Hora has been operating non-stop since 1978; the sign above the door reads “Yialos,” but everyone knows the place as stou Bakogia (“at Bakogias’ place”). Every Sunday, after church services, locals gather and drink tsipouro, argue about soccer and politics, laugh and even sing together. At the peak of the summer season, some 200 eggs a day are prepared in their kitchenette.

Up until four years ago, Kyria Vasiliki (Kyria, the Greek term for “Mrs.”, is also a term of respect) had been at the frying pan but, since then, her daughter Asimina and granddaughter Vasiliki have taken over. Little meze dishes come and go, accompanying the ouzo and tsipouro. A definite must-try is the local cold cut louza, as well as the mostra – a rusk topped with local kopanisti cheese, chopped tomatoes and capers.

AT THE LOCAL MARKET

Early in the morning – before the first cruise ships arrive and Hora becomes inundated with tourists – head on down to the Gialos waterfront area to get a taste of the authentic everyday life of Mykonians. Fishing boats return with their daily catch between 8:00 and 9:00 in the morning. Mykonians exchange their first greetings of the day as they mill around in front of the long marble slab, doubtless filled with rockfish or other creatures from the open seas.

Local farmers are there as well, and they, too, take up their positions, selling their limited produce from 8:00 in the morning until 12:00 noon. They set up their crates, displaying whatever their arid land has to offer – juicy tomatoes, little cucumbers and small melons, as well as sweet figs and apricots. A pair of boisterous ducks are the market’s unofficial mascots, while the island’s famous pelican puts in appearances on a regular basis as well. 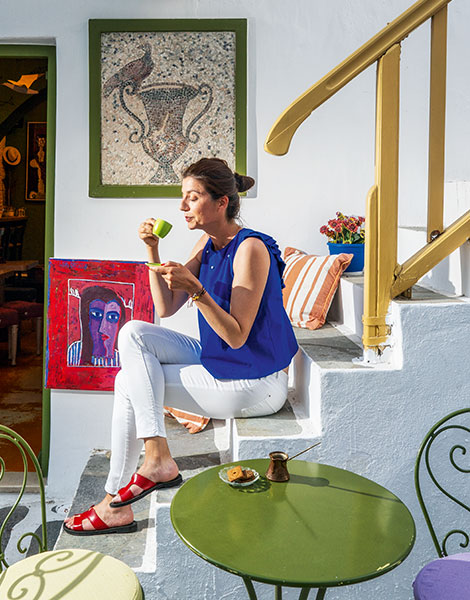 Chora is definitely ideal for world-class gallery-hopping. Artists recognized by the greatest museums around the world – including the Guggenheim, the Met and the Tate London – often select the island as the place to present their latest paintings, sculptures, photography and video-art creations.

The Rarity Gallery has gained many distinctions throughout the course of its 23 years of operation, and attracts visitors ranging from international collectors to ordinary tourists. This year, it added a new wing and is hosting video sculpture installations by Swiss visual artist MARCK. 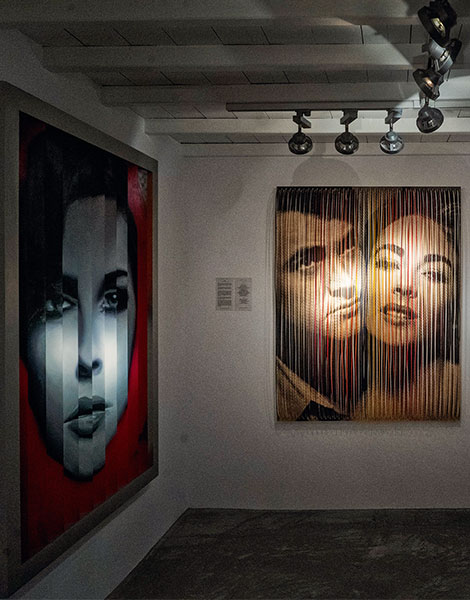 This summer, the Dio Horia Contemporary Art Platform is presenting a group exhibition entitled “Dancing Goddesses,” which delves into the subject of what happened to the nearby islet of Delos when people no longer lived there. You can also make your way to the rooftop of the art space, where you’ll find a stylish café-bar offering a view over Hora.

Gallery Skoufa is a definite must if you’re interested in the work of contemporary Greek artists. There’s art beyond the galleries, too; you can view works by Mexican painter Luis Orozco – a permanent resident of the island – while enjoying a Greek coffee at the Notorious Food Bar or a cocktail at Montparnasse – The Piano Bar.

AND THE OSCAR GOES TO… “A NIGHT OF STARS”

The Cine Manto is a haunt for artists, an all-day café-restaurant and also the home of the island’s famous pelican – in other words, it’s a veritable safe haven from the luxury lifestyle of Mykonos and, at the same time, a rare green space in Hora. However, the main reason to visit Cine Manto is because it offers one of the top Greek summertime experiences: movies under the stars.

Tip: Give in to the tempting aroma of meat on the grill wafting over from the cinema’s snack bar, and watch your movie like the locals often do, with a souvlaki skewer in one hand and an ice-cold beer in the other

Do you think you can fit through the narrowest alley in Hora? You’ll find it running between the Panachra Church and a neighboring shop called Tracce Collection. The end of it that intersects with Panachrantou Street is only 34cm wide.

From this street, you’ll almost certainly enter it sideways, but as you advance, the little lane widens a bit, and you’ll come out onto Aghion Tessarakonta Street through an opening that’s a generous 64 centimeters wide. Few tourists notice it, but those who do realize that the alley is there usually form a line in order to snap squeezed-in selfies.

A TASTE OF TRADITION

At the butcher shop Madoupas, whose history goes all the way back to 1930, the employees are always eager to treat you to a slice of louza, the local cold cut that the Mykonians adore.

Prepared with passion and care, it’s made from pork sirloin which is cured in salt, then desalted and generously sprinkled with herbs and spices such as summer savory, oregano, allspice and black pepper.

In the same street with Madoupas, you’ll discover the quiet workshop of “the Saint of Mykonos.” This is how the distinguished self-taught Athenian-born icon painter Merkourios Dimopoulos is known locally. His grandmother was a native Mykonian, and he himself has lived on the island since 1987.

Unperturbed by the rhythm of modern life around him, Dimopoulos creates faithful reproductions of icons from the Cretan, Russian and Heptanese schools of iconography. The process includes smoothing the wood using sandpaper, filling it in with Bologna chalk and gilding it with 22K gold leaf.

Tourists often commission works; he says that icons of the Prophet Joel and of the archangels Michael, Gabriel and Raphael are currently the most popular. “People are trying to find a guardian angel,” the artist explains.

LIFE AS IT WAS

You can take a trip into the past by simply entering the museum known as Lena’s House, which faithfully re-creates the look and feel of an urban Mykonian dwelling of the 19th century. As you tour the drawing room with its antique furniture and stroll through the two bedrooms at the back, you’ll feel as though you’ve been walking into a family home rather than a museum. The Venetian bed has hand-drawn paintings on it, and a lit lamp and open prayer book sit on the nightstand next to the bed.

After Lena Skrivanou – its last occupant – died in 1968, those who inherited the house gifted it to the Folk Museum of Mykonos, and it has since constituted an annex of that institution. The museum was established in 1958, and its collections are exhibited in six halls. The display items range from antique furniture pieces and authentic costumes to elaborate, handcrafted jewelry created by well-known designer Sophia Thanopoulou (known as Maroulina). Stars like Greta Garbo and Elizabeth Taylor bought items from the little shop that Thanopoulou operated in Matogianni from 1959 until 1972.

It’s 3:30 in the morning. For the after-hours crowd, much of the night still lies ahead, but at Psyllos’ Bakery, in operation since 1958, the new day has already begun, and the first loaves of seven different types of bread are almost ready to come out of the oven. The smell of freshly baked bread floods the little dead-end side street in front of the bakery.

“I don’t have a sign up on the bakery on purpose. I don’t want to be overrun by customers,” says Yiannis Vamvakouris, who inherited the business from his father.

By 4:00 in the morning, pans filled with sfoliates (puff pastries), koulouria (circular-shaped sesame-covered bread) and local-style paksimadia (rusks) are coming out of the oven, ready for sale to both the early-bird local homemakers and the last of the all-night revelers.

As you descend into the cool, half-lit basement of the Gioras Wood Bakery, bear in mind that this isn’t going to be just another caffeine stop. This building, which dates back to 1420, has managed to preserve both its old, medieval charm and its profit margin. Once the oldest wood-fired bakery in the Cyclades islands, the establishment recently responded to a drop in demand for bread by shifting its business focus to operate exclusively as a café. So, take your spot at one of their little tables and enjoy a cappuccino freddo, and while you’re at it, be sure to sample their homemade biscuits and famous baklava.

Don’t miss the renovated Archaeological Museum of Mykonos. The museum was built back in 1900, mainly to house findings from the excavation of the “Pit of Purification” (dating from the 5th century B.C.) and the necropolis of Rhenia.

Walking through the six rooms you will travel back in time admiring the masterpieces such as the Pithos of Mykonos, a unique burial urn from 670 BC that depicts the capture of Troy and bears an anti-war message.

NOT ONLY FOR THE FAITHFUL

The Church of Panagia Paraportiani is one of the loveliest and most photographed churches in the Cyclades. It got its name from the fact that it is located next to the paraporti – the old, smaller, secondary back gate – of the Kastro, where it has stood for half a millennium.

What most tourists are unaware of, however, is that it is, in fact, not one church but five. Four of them – dedicated to Aghii Anargyri, Aghios Efstathios, Aghios Sozon and Aghia Anastasia – are to be found on the ground floor, while the fifth – the Byzantine church of the Panagia, or “Virgin Mary” – is one level up.

Just before the close of day, “sunset hunters” take up their positions here, cameras in hand. The question that comes to mind is whether it’s the church that makes the sunset more beautiful, or if it’s the other way around. Spend that magical part of the evening here at least once during your stay on the island, and you’ll probably agree that the answer doesn’t matter, it’s the amazing feeling that counts.